“Our diets are killing us,” he stated emphatically. “And it’s indisputable!”

“Pardon?” I said, his startling declaration taking me by surprise.  After all, we were enjoying a terrific day of fishing.

“Since we changed the way we eat, there has been an tragic explosion in dis-ease,” he replied.

“You must be talking about the ‘fast food’ phenomenon,” I said. 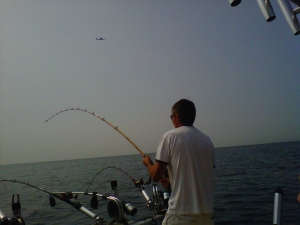 “Which spelled the end of nutritious home cooked meals as a standard, didn’t it?”

For the next few minutes, we fished quietly. The bass were biting and we were hoping to land a big one, but I could tell by his deeply furrowed brow and concerned expression, he wasn’t finished with our conversation.

“In the last 20 to 30 years there has been a rapid increase in cancer, heart disease, strokes, asthma, MS, Parkinson’s, arthritis, migraine headaches, food sensitivities, Alzheimers and ADHD,” he said, breaking the silence. “It’s not a coincidence that this has happened at the same time our diets changed.”

“Is it all because of refrigerators and fast foods? Surely there must be other factors.”

“Definitely! There have been several other reasons.”

“What are they?” I asked, feeling a little nibble at the end of my line.

“Pasteurization?” I asked. “I thought it was supposed to make milk safe to drink.”

“It was. It was intended to kill harmful micro-organisms. The problem is, the pasteurization process kills everything in the milk, including the healthy bacteria that our digestive system needs in order to properly digest food and build up our immune systems.”

I was momentarily distracted when the nibble turned in to a full on hit. “Got one!” It took a few moments for me to reel in the fish, and while doing so, my fishing companion paused to watch me bring it in.

“Do you need the net? he asked.

“No thanks,” I replied. “Feels like a small one.” Which indeed it was, so I quickly returned it to the water.

After a few minutes of silence, he went on. “What is worse, now we pasteurize everything … juices, even almonds.”

“That’s ridiculous,” I remarked. “Why do we need to pasteurize almonds?”

“Almonds, like everything else, are supposedly pasteurized in the name of food safety, but the reality is, the main reason foods are pasteurized is to lengthen their shelf life, which in turn increases sales. The more dead the food is, the longer it will take to spoil and the more chance there is to sell it. But this food has virtually no nutritional value.”

“But people are living longer, so how can the food we eat be killing us?”

“Are we really living?” he replied.

I thought about all the poor souls in hospitals and long-term care facilities and all those taking a myriad of pills, and I had to agree. That’s not really how we are meant to live. “We need to educate people and convince them to change,” I said resolutely.

“What then would you tell people if you could?”

“I would implore them to eat healthy. I would beg them to change their diets immediately, so that disease cannot invade their bodies. I would encourage them to do their research; learn about all the unhealthy practices that are rendering our food unhealthy. I would ask them to make their diets a priority, not an afterthought.”

“People certainly need to know the truth,” he agreed. “But we’ve been begging people for decades not to smoke cigarettes, and still, they smoke. Asking people to come to their senses doesn’t seem to work.”

“What would you suggest then?” I asked, nodding my head in agreement.

“Take them where we want to go, rather than where we don’t want go,” I suggested.

“Exactly. I would also ask them to envision a world where all parents raise their children to feel good about themselves. Where they teach them good eating habits.”

“Sounds like a good strategy. How we feel about ourselves has a lot to do with how we eat.”

“That’s not all,” he continued. “Next, I would ask them to envision a world where schools teach children about the function and importance of the immune system, and where it helps children understand the role of a healthy diet in maintaining a healthy immune system.”

“Yes,” I agreed. “The education system certainly needs to get involved.”

“Finally, I would ask them to imagine how happy their digestive system would feel when they sat down to a home cooked meal of delicious, locally grown organic food,” he concluded.

“And if that didn’t work, I would also remind them that the companies that make all the processed foods we eat are more concerned about profits than they are about our health,” I added

“Got another one,” I exclaimed, jolted back to the task at hand by the big wham on my line. “Feels like a big one!”

“The fish sure like that lure,” he said smiling.

Have an awesomely healthy day!